Vertiflex Superion is a relatively new procedure for treating lumbar spinal stenosis, a common cause of lower back pain in people over 50.  Vertiflex Superion provides lasting pain relief without the risks or long recovery time of major surgery.  In fact, Vertiflex  Superion can eliminate the need for major spine surgery for many patients.

What is Vertiflex Superion?

Vertiflex Superion is a simple, safe treatment that provides effective long-term relief of back and leg pain from lumbar spinal stenosis. This FDA approved procedure uses a small implant to create space for nerves of the back. This indirect spine decompression procedure reduces or resolves pain for 90% of patients.

Spinal stenosis is caused by normal aging changes in the spine. Lumbar spinal stenosis occurs in the lower back and can trigger leg pain, numbness and tingling when bones or discs start to pinch nerves.

Who is a good candidate for the Vertiflex Superion procedure?

Anyone with lumbar spinal stenosis who is experiencing pain that affects quality of life may be a good candidate for the Vertiflex procedure.  Some patients who have been told they need major back surgery such as a laminectomy or spinal fusion may be candidates.

Here are some specific examples of patients who may be helped by Vertiflex:

Do you think you may be a candidate for the Vertiflex Superion procedure?

Click Here to Reach Out to Our Pain Specialists

How does it work?

Vertiflex Superion supports your existing anatomy. A small, flexible device is placed between two vertebrae of the spine through a small incision about 1” long. The device is opened between the back bones to create space in the spinal canal which relieves pressure on surrounding nerves.

This simple micro-surgery is performed on an out-patient basis. It takes less than an hour and patients can return to their normal routine the day after surgery. No rehabilitation or other physical therapy is needed. The recovery period is short, just 6-weeks with no bending, twisting or lifting more than 10 lbs. 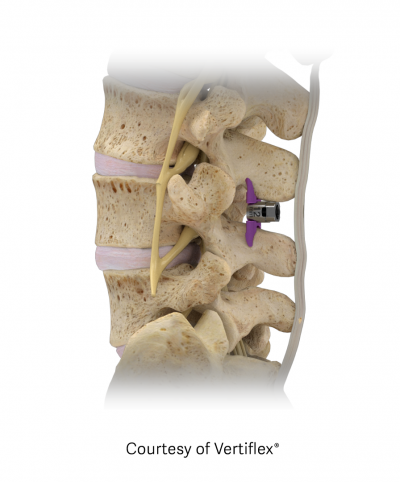 James is looking forward to an active life, well into his 80s.

James B has always been very active, enjoying sports from water polo to snow skiing and his job as a project manager on large building jobsites.

Back, hip and leg pain on his left side began to slow James down a couple of years ago. His work and personal life became very limited. Soon after he developed even worse pain on his right side and lost control of his right leg. It was difficult to walk, and taking steps was almost impossible.

James’ doctor told him he had lumbar spinal stenosis and referred him to the doctors at the Heilman Center. He tried injections but got little relief.

James’ son is getting married in a few months, and he wants to be able to walk down the aisle. He’d been told he needed major back surgery, but a long recovery period was not an option. When James’ doctor at the Heilman Center told him that pain relief is possible within a week of having the Vertiflex Superion procedure, he wanted to give it a try.

Vertiflex Superion worked better than James could have hoped. A week after the procedure, James reported that he is almost 100% better. His pain has dropped from a rating of 10+ to 0.5. James regained use of his right leg. Now he can walk and take stairs normally. James no longer needs pain medicine. And he is looking forward to his son’s upcoming wedding.

What are the advantages?

Vertiflex provides fast relief of pain caused by lumbar spinal stenosis. Many patients report relief in as little as one week after their procedure. Relief generally improves over time. In fact, this procedure has the potential to provide lifetime pain relief in the affected area of the back for many patients.

When the alternative is major surgery, Vertiflex Superion provides all the benefits of laminectomy surgery without the risks. The other advantage of this procedure is the short recovery time of just a few weeks, compared to months needed for recovery from major back surgery.

Some additional benefits that have been shown by research studies include:

How do you know if you have lumbar spinal stenosis?

Constant ache and pain in the lower back may be a sign of lumbar spinal stenosis. Pain that gets worse when standing but improves when sitting or bending forward slightly, as when leaning on a grocery cart, is the classic symptom of spinal stenosis. More than 40% of people over the age of 60 have spinal stenosis, a result of normal aging. ¹

Spinal stenosis will not improve on its own because it is caused by physical changes in the spine. Over time, it is likely to get worse. When pain starts to limit everyday activities and affect quality of life, it is time to get help. You don’t have to live in pain.

What are your next steps if you think you have Spinal Stenosis?

The first step will be getting an accurate diagnosis. A Spine and Pain Care Specialist with expertise in Interventional Pain Management, such as the doctors at the Heilman Center, is the best doctor to see for diagnosing back pain.

Heilman Center doctors have advanced training in the complex interactions of the bones, discs, and nerves of the back. They use advanced diagnostic imaging techniques to accurately diagnose the root cause of the pain. With an accurate diagnosis, the Pain Specialist can tell you whether Vertiflex Superion is a good choice to provide lasting relief for your back pain.

Why Wait to Find Pain Relief?

Appointments are available in the next week.

The sooner you get started, the sooner we can help you find relief.

Your First Step to Pain Treatment